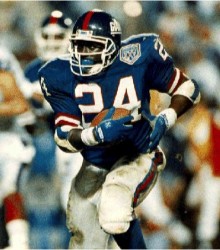 Ottis Anderson was a football and track star at Forest Hill Community High School in West Palm Beach, FL. He went on to attend the University of Miami on a full athletic scholarship. During his college football career, Anderson broke Chuck Foreman’s career rushing records at the University of Miami, becoming the first player to rush for more than 1,000 yards in the school’s history his senior year with 1,266 yards. He was named The Sporting News and the American Football Coaches First Team All-American. Ottis graduated in 1979 as the team’s all-time leading rusher with 3,331 yards.

Anderson was selected in the first round of the 1979 NFL Draft, the 8th overall pick, by the St. Louis Cardinals. His 1,605 rushing yard performance was one of the few bright spots in the Cardinals’ 1979 season, when they finished 5-11. He earned the first of back-to-back Pro Bowl selections that year.

In his first six seasons, Anderson rushed for over 1,000 yards in five seasons. The lone exception was in the 1982 strike-shortened season, when he rushed for 587 yards in eight games, and was on pace for well over 1,000 yards, if 1982 were a full 16 game season.

Anderson finished his career ranked highly in NFL history in career rushing touchdowns and is one of only a few running backs in the history of the NFL to rush for more than 10,000 yards.