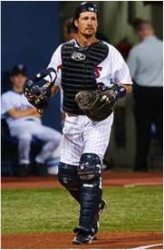 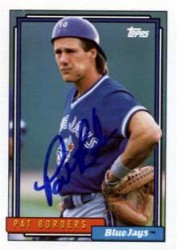 Pat Borders went to Lake Wales High School where he played both football and baseball. In baseball, Borders batted .440 as a junior and .510 as a senior. During his senior year he had 10 homeruns and 36 RBI. He turned down a football/baseball scholarship to Mississippi State University to sign with the Toronto Blue Jays. He was drafted in the sixth round in 1982. His debut was in 1988, and he played in 56 games. In 1992, his batting average was .450. 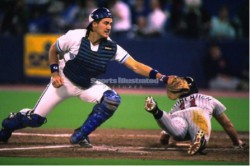 After playing for the Blue Jays for six years, he went to 10 different teams including: Kansas City Royals, Houston Astros, St. Louis Cardinals, California Angels, Chicago White Sox, Cleveland Indians, back to the Blue Jays, Seattle Mariners, Minnesota Twins, and then back again to Seattle. For the start of the 2005 season, Borders became the primary catcher for Seattle. His batting average was .253 with 69 homeruns, 346 RBI, and played in 1099 games.

Borders is one of four to have won both a World Series Championship and an Olympic Gold Medal.