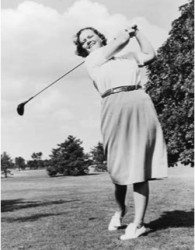 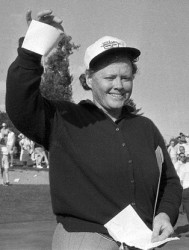 Patricia Jane Berg (February 13, 1918 – September 10, 2006) was a professional golfer and a founding member and then leading player on the Ladies Professional Golf Association (LPGA) Tour during the 1940s, 1950s and 1960s. Her 15 major title wins remains the all-time record for most major wins by a female golfer. She is a member of the World Golf Hall of Fame.

In 1963, Berg was voted the recipient of the Bob Jones Award, the highest honor given by the United States Golf Association in recognition of distinguished sportsmanship in golf. Berg received the 1986 Old Tom Morris Award from the Golf Course Superintendents Association of America, GCSAA’s highest honor. The LPGA established the Patty Berg Award in 1978.