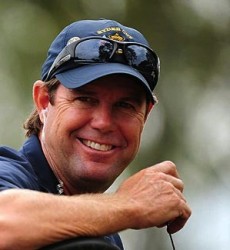 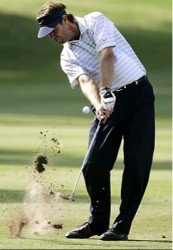 Paul Azinger, from Sarasota, FL, is a former professional golfer who attended and played golf at Florida State University. Paul turned professional in 1981. He finished one shot behind the winner, Nick Faldo, in the 1987 Open Championship.

Azinger won eleven tournaments on the PGA Tour in seven seasons from 1987 to 1993, climaxing in his one major title, the 1993 PGA Championship. Paul was subsequently diagnosed with non-Hodgkins lymphoma. His treatment included six months of cchemotherapy and five weeks of radiation. He wrote a book called Zinger about his battle with the disease and was the recipient of GWAA Ben Hogan Award in 1995, given to the individual who has continued to be active in golf despite physical handicap or serious illness.

In 2000, he won his first tournament in seven seasons at the Sony Open in Hawaii. Azinger was the U.S. Ryder Cup captain for 2008 at Valhalla Golf Club in Louisville, KY. He led the team to its first victory over the European squad since 1999. The team’s victory was largely credited to his innovative strategy. Paul made his Champions Tour debut at The ACE Group Classic in February 2010.