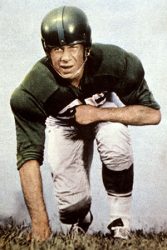 Born in Orlando, Florida on Oct. 22, 1923, Pete Pihos played college football, principally as an end and fullback, for Indiana University from 1942 to 1943 and 1945 to 1946. His collegiate career was interrupted by World War II, when Pihos was drafted into the United States Army in January 1944. He served in the 35th Infantry Division under George S. Patton. Commissioned as a second lieutenant on the battlefield, he was awarded the Bronze Star and Silver Star medals for bravery.

Upon his return to Indiana, Pihos would earn All-America honors and lead the Hoosiers to its only undefeated season in school history and its first conference championship. Following graduation, Pihos was drafted by the Philadelphia Eagles.

He would go on to play nine seasons, where he would play in six pro bowls and earn first team All-Pro honors six times.  Pihos would also help lead the Eagles to back-to-back NFL Championships in 1948-49. A member of the Pro Football Hall of Fame, the College Football Hall of Fame and the Indiana Hall of Fame, Pihos was inducted posthumously into the Florida Sports Hall of Fame on Nov. 7, 2018. Pete passed away in Winston Salem, NC on Aug. 16, 2011.