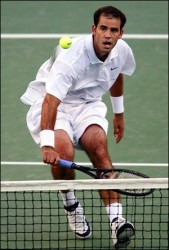 Pete Sampras (born August 12, 1971) is a retired American tennis player and former World Number 1. During his 15-year career, he won 14 Grand Slam men’s singles titles. A record at the time, this number was eventually surpassed by Roger Federer at Wimbledon in 2009. He had a 204–37 win-loss record over 52 Grand Slam singles tournament appearances. Sampras is regarded as one of the greatest players of all time.

Pete debuted on the professional tour in 1988 and played his last top-level tournament in 2002 when he won the US Open, defeating longtime rival Andre Agassi in the final (last match of Sampras career). He was the year-end World No. 1 for six consecutive years (1993–1998), a record for the open era and tied for third all-time. His seven Wimbledon singles championships is a record shared with William Renshaw. He spent 286 weeks at the top of the list of ATP No. 1 ranked players, the most of any player. His five U.S. Open singles titles is an open-era record shared with former World No. 1 players Jimmy Conors and Federer.