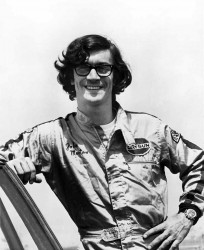 Peter Gregg was a decorated racecar driver during the golden age the Trans Am Series. He was a four-time winner of the 24 hours of Daytona and owner of Brumos car dealership.

Born on May 4, 1940 the son of a mechanical engineer graduated with a degree in English from Harvard University. Following graduation, Peter moved to Europe and attended the Centro-Sud Driving School. He then joined the U.S. Navy and became an Air Intelligence Officer, and was assigned to the Naval Air Station in Jacksonville, FL and served there until he was discharged in 1965.