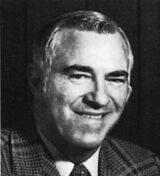 Ray Graves was at the helm of the Florida Gator football team from 1960 to 1970. Graves compiled a 70-31-4 record as the Gator’s head coach which at the time stood as the record for most wins (70) in school history. Graves led Florida to winning records in 9 of his 10 seasons, including nine or more wins three times. Ray’s teams also appeared in five bowl games, posting a 4-1 record. He coached Florida’s first Heisman Trophy winner in Steve Spurrier, who captured college football’s most prestigious honor in 1966.

Graves’ best season was 1969 as his Gators posted a 9–1–1 record and upset the Tennessee Volunteers, 14–13, in the Gator Bowl and were ranked 14th in the final AP Poll. After achieving an all-time win-loss record at Florida of 70–31–4 (.686) and 4 final top-20 poll rankings (1960, 1965, 1966, 1969), Graves stepped down to make room for former Gators quarterback Doug Dickey to return to his alma mater as head coach for the 1970 season. Graves remained the winningest coach in Gator football history until his former quarterback, Steve Spurrier, surpassed him in 1996.

In one of his most interesting footnotes to his football career, Graves allowed Dr. Robert Cade, professor in the University of Florida College of Medicine, to conduct dehydration analysis and rehydration experiments using team members which led to the formulation of Gatorade in 1965. After seeing the formula’s potential in an intra-squad scrimmage, Graves asked Cade to make enough for the entire team for the next game against LSU; the Tigers wilted in the 102-degree game-day heat, and the Gators came from behind to win in the second half.

Graves was inducted into the College Football Hall of Fame as a coach on December 4, 1990.