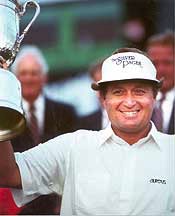 Raymond Loran “Ray” Floyd (born September 4, 1942) was born at Fort Bragg, North Carolina and attended the University of North Carolina. Turn a professional golfer in 1961, he quickly established himself on the PGA Tour, with his first victory coming at the St. Petersburg Open Invitational in 1963. Floyd went on to win 22 times on tour, with his final win coming in 1992 at the age of 49, making him one of the oldest players to win a PGA Tour event. He also won on the Champions Tour later that season, making him the first player to win on both tours in the same year. Floyd’s wins included four major championships: the 1969 and 1982 PGA Championships; the 1976 Masters; and the 1986 U.S. Open. He ranks among the oldest players to have won a major. In addition, he came very close to becoming the first player to have won major championships in four different decades, most notably at The Masters in 1990, where he lost in a playoff to Nick Faldo. Floyd finished 1982 ranked second in Mark McCormack’s world golf rankings, behind only Tom Watson who had won two majors that season, and in 1992 he finished the year ranked 14th on the Official World Golf Rankings at the age of 50, one of the highest positions ever attained by a player of that age. Floyd’s successful run continued after he became eligible to compete on the Senior PGA Tour, now the Champions Tour, in 1992, with 14 wins between 1992 and 2000, including four senior majors and two Senior Tour Championships. On April 6, 2010, on the eve of the 2010 Masters Tournament, Floyd announced his retirement from competitive golf. In addition to his victories on these two main tours, Floyd won at least 24 additional tournaments around the world, taking his total victory tally to at least 60 events. He played for the U.S. on eight Ryder Cup teams (1969, 1975, 1977, 1981, 1983, 1985, 1991, and 1993) and captained the team in 1989, and was an assistant captain in 2008. He won the Vardon Trophy for lowest scoring average on the PGA Tour in 1983. Floyd was inducted into the World Golf Hall of Fame in 1989.