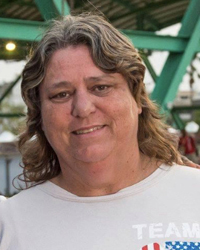 Renee Hildebrand is a former Vice President of the Board of Directors for USA Roller Sports and former Head Coach of Team USA-Florida.

Renee is known in the speed skating circles, both inline and ice, and her name held in the highest regard. As the founder and lead coach of inline speed team, Team Florida, her team and the skaters she’s produced are truly at home nowhere else like they are when they’re on the top of the podium.

For more than three decades, Renee Hildebrand has been training Ocala kids to become inline speed skating world champions. Three of her most accomplished former pupils on wheels have since transitioned to the ice, drawn by the challenge of mastering a new sport and the chance to chase Olympic glory: Brittany Bowe, seven-time world champion and two-time Olympian, Erin Jackson, 2022 Winter Olympic Gold Medalist in the 500 meters, and Joey Mantia, an Olympic medalist and 28-time world champion and world record holder.