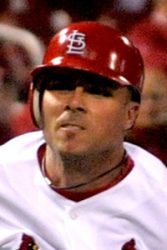 Of the more than 22,000 players who have played Major League Baseball, there are exactly two who have hit at least 25 home runs in a single season and then (as a pitcher) won 10 games in a season. The first was George Herman “Babe” Ruth. The other – Rick Ankiel.

Rick was drafted by the St. Louis Cardinals in the second-round of the 1997 MLB draft. Two years later, as the #2 prospect in all of baseball, he earned a promotion to the majors where he was the youngest player in the big leagues. In 2005, he switched positions and became an outfielder, one of only 12 players in MLB History to have debuted as a pitcher and then switched to be a position player. He played all three outfield positions and suited up for the six different MLB teams.