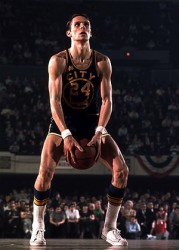 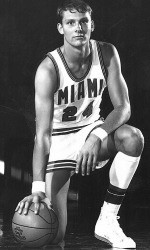 Richard (Rick) Francis Dennis Barry III was an All-American basketball player for the University of Miami, where he starred for three seasons. As a senior in the 1964-65 campaign, Barry led the NCAA with a 37.4 points-per-game average. Barry and the Hurricanes did not take part in the NCAA Tournament, however, because the basketball program was on probation at the time. Barry is one of just three basketball players (along with Tim James and Jack McClinton) to have his number retired by the school.

Barry was drafted by the San Francisco Warriors with the second pick of the 1965 NBA Draft. He is considered by many veteran basketball observers to be one of the greatest pure small forwards of all time as a result of his very precise outside shot, uncanny court vision, knowledge and execution of team defense principles, tenacious and demanding will to win, and unorthodox but accurate underhanded “granny shot” free throw shooting. Barry is one of few elite players who altered their games without losing effectiveness; he broke into the professional ranks as a rebounder and all-purpose points machine before he morphed into a primary ball distributor and lethal perimeter threat.

Named one of the 50 Greatest Players in History by the NBA in 1996, Barry is the only player to lead the National Collegiate Athletic Association (NCAA), American Basketball Association (ABA) and NBA in scoring for an individual season. In 1987, Barry was inducted into the Naismith Memorial Basketball Hall of Fame.