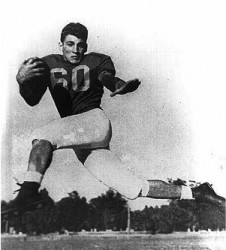 Richard Jose “Rick” Casares was born in Tampa, FL. He attended Jefferson High School where his teachers introduced him to high school sports as a way to keep him interested in school. After graduating from high school, he received an athletic scholarship to attend the University of Florida where he played fullback for coach Bob Woodruff’s Florida Gators football team from 1951 to 1953.

Casares was selected in the second round of the 1954 NFL Draft by the Chicago Bears, for whom he played from 1955 to 1964. Rick led Chicago in rushing from 1955 through 1960. In 1956, he led the NFL in rushing with 1,126 yards which was, at that time, the second most yards gained in a single season in the NFL. Behind Casares’ hard-nosed rushing, the Bears advanced to the 1956 NFL championship game. In the championship game, the New York Giants stifled Casares and went on to defeat the Bears, 47–7. After ten seasons with Chicago, Casares was the Bears’ all-time leading rusher with 1,386 carries, 5,657 yards, and forty-nine rushing touchdowns. His Chicago rushing records weren’t broken until Walter Payton shattered them in the 1980s.

Casares finished his professional career with the Washington Redskins in 1965, and in 1966 for the American Football League’s Miami Dolphins, receiving only limited carries in his final two seasons.