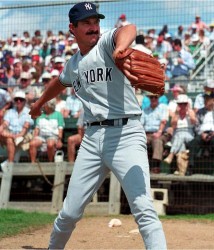 Richard Alan Rhoden was born on May 16, 1953 in Boynton Beach, FL. Overcoming a childhood bone disease called osteomyelitis, he attended Atlantic High School in Delray Beach. There, he became the star pitcher for the school’s baseball team. Instead of attending college in 1971 after graduation, Rhoden elected to play minor league baseball.

Since his retirement from baseball, Rhoden has picked up a new professional sport – golf. Qualifying for the U.S. Senior Open and becoming a dominant player of the Celebrity Players Tour, he has played in a number of Champions Tour events. Rhoden has won the American Century Celebrity Golf Classic eight times.