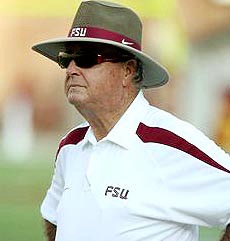 Robert Cleckler Bowden (born November 8, 1929) is a retired college football coach. He coached the Florida State University Seminoles’ football team from the 1976 to 2009 seasons. During his time at Florida State, Bowden led FSU to an Associated Press and Coaches Poll National Title in 1993 and a BCS National Championship Title in 1999, as well as twelve Atlantic Coast Conference Championships since FSU joined the conference in 1991.

In his 44 seasons as a head coach, Bowden had 40 winning seasons, and 36 Division 1-A winning seasons. During the period 1987–2000, Bowden coached Florida State to 14 straight seasons with 10 or more victories, and his team had a final ranking of fifth or higher in both of the major polls.

After a difficult 2009 season and amid questioning fans, Bowden announced his retirement from FSU on December 1, just weeks after his 80th birthday. His final coaching appearance was the 2010 Gator Bowl game on January 1 with a 33-21 victory over his former program, West Virginia.

Bowden finished his career second in all-time wins by a Division I – Football Bowl Subvision coach with 377 wins. A March 6, 2009 NCAA ruling requiring Florida State to “vacate wins for any games in which an ineligible player participated,” threatening to remove as many as 12 of Bowden’s wins from the 2006 and 2007 seasons in relation to an academic scandal, Florida State appealed the ruling, but it was upheld. Upon final investigation by FSU, it was determined that Bowden was to vacate 12 wins, bringing his final career record to 377-129-4.

As of the 2009 season, Bowden was one of four active coaches inducted into the College Football Hall of Fame as coaches (along with Chris Ault, Joe Paterno, and John Gagliardi).