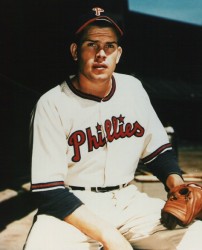 Robin Evan Roberts played baseball for Michigan State University, after attending the Army Air Corps training program. He made his Major League Baseball (MLB) debut on June 18, 1948 for the Philadelphia Phillies. In 1950, he led the Phillies to their first National League (NL) pennant in 35 years. Between 1950 and 1955 Roberts won 20 games each season, leading the NL in victories from 1952 to 1955. Six times he led the league in games started, five times in complete games and innings pitched, and once pitched 28 complete games in a row. During his career, Roberts never walked more than 77 batters in any regular season. In addition, he helped himself as a fielder as well as with his bat, hitting 55 doubles, 10 triples, and five home runs with 103 RBI. Because of his 28 wins in 1952, he won The Sporting News Player of the Year Award. Roberts was traded to the Yankees in 1961; however, his #36 jersey would be the first number retired by the Phillies. From New York, he moved to the Baltimore Orioles, the Houston Astros, and the Chicago Cubs. At the end of his career in 1966, he had accumulated seven All Star selections, two NL TSN Pitcher of the Year, and the 1962 Lou Gehrig Memorial Award. After his playing career, Roberts served as the head coach for the University of South Florida baseball team from 1977-1985. He even led the team to their first NCAA Tournament in 1982. He died on May 6, 2010, at his home in Temple Terrace, FL.