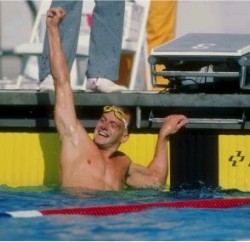 Ambrose (“Rowdy”) Gaines IV (born February 17, 1959 in Winter Haven, FL) is a former American swimmer, U.S. Olympic Hall of Fame member, Olympic 3-time gold medalist, and member of the International Swimming Hall of Fame. He is currently the chief fundraiser for USA Swimming as well as a swimming analyst for television networks ESPN and NBC including coverage of the 2008 Beijing Summer Olympics, his 4th as a TV commentator.

At Auburn he became a 5-time NCAA champion. During one 4-year period, Gaines held 11 World Records and would have been a favorite to win multiple medals at the 1980 Summer Olympics in Moscow had the United States not boycotted the event. After graduating from Auburn in 1981, he stopped swimming for several months, thinking he had missed his opportunity to be an Olympic medalist, but was urged to resume swimming by his father. When Gaines qualified at the 1984 Olympic trials, he was not expected to place at the 1984 Summer Olympics in Los Angeles. He won the 100-meter freestyle and swam the anchor leg for both the US gold medal-winning 4 x 100-meter freestyle and 4 x 100-meter medley teams.

In August 1991, Gaines was temporarily paralyzed with Guillain-Barre syndrome. After a 2-month hospitalization, he experienced a surprising full recovery attributed largely to his superb physical condition as a competitive swimmer. He eventually regained world-class times and, at the age of 35, became the oldest swimmer to qualify for the trials for the 1996 Summer Olympics. Ultimately, he chose not to compete in the trials for Atlanta but rather continue his career as a television commentator, covering swimming for NBC at the Games.

Gaines eventually moved to Colorado to become the Chief Fundraising and Alumni Officer for USA Swimming.

Gaines still holds Masters long course world records in several freestyle events in the both the 30-34 and 35-39 age groups. Gaines currently resides in Lake Mary, FL where he is Executive Director of Rowdy’s Kidz, a charitable program sponsored by The Limu Company.