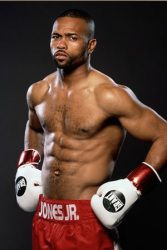 A native of Pensacola, Jones Jr. has spent most of his entire life in the boxing ring. As an amateur, he won the 1984 Junior Olympics at 119 pounds and was the National Golden Gloves champion at 139 pounds in 1986 and at 156 pounds in 1987.

Often considered to be one of the greatest boxers of all-time and a candidate as one of the top pound for pound fighters of his generation, Roy Jones, Jr. cemented his place in boxing lore by becoming the first middleweight champion in 106 years to win a heavyweight title when he took the WBA Heavyweight belt in 2003. He was inducted into the Florida Sports Hall of Fame on Nov. 7, 2018.