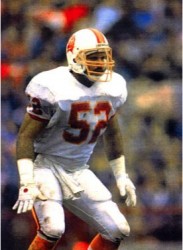 Scot Brantley was linebacker for the Florida Gator football team from 1976-1979. As of 2010, Scot is still the 2nd-leading tackler in school history with 467 career tackles. His 193 tackles in 1978 rank 2nd in a single-season effort. Brantley is one of two true freshmen in school history to lead the Gators in tackles during his 1st season in Gainesville (145, 1976). A consensus All-SEC selection for the 1977 and 1978 seasons, Scot was also a Pre-season All-American and coaches’ choice as the most outstanding linebacker in the SEC for the 1979 season. He was selected as a Prep All-American as the nation’s top high school defensive player by Parade Magazine in 1975. Following his college career, Brantley played 8 seasons for the Tampa Bay Buccanneers in the National Football League. After concluding his football career, Scot almost immediately pursued a career in broadcasting. He has served on the Gator Radio Network as both a color analyst during games and an analyst during pre-game, halftime, and post-game shows. In addition, Scot spent 10 seasons as the broadcast partner of Gene Deckerhoff on the Buccaneers Radio Network. He now hosts a daily radio show on WHBO in Tampa every afternoon. Although Scot has had a nice career after football, he has endured some difficult times. The Gators and Buccaneers both unexpectedly dropped him from their broadcast booths after the 2004 and 2005 seasons, respectively, after he had spent many years in those positions. Hardy Nickerson replaced him for the Bucs broadcasts, while Lee McGriff took his spot when he returned to the Gators broadcasts after spending several years alongside Mick Hubert in the 1980s and 1990s. His radio show on WQYK-AM was also cancelled due to multiple format changes with the station.