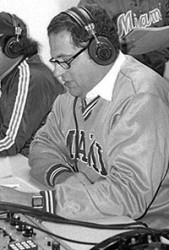 Hirsch was the voice of the Miami Hurricanes for 28 years. He handled play-by-play for football and basketball from 1958-71 and returned to those two sports plus baseball from 1983-97. He also served as GM of the Miami Marlins of the Florida State League for 10 years.

He received a special honor in 1998 from the UM Sports Hall of Fame and is a member of the City of Miami Hall of Champions. He died in 1999.