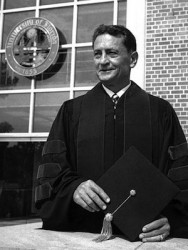 Stephen O’Connell was born in West Palm Beach, FL in 1916. After graduating from high school, he attended the University of Florida from 1934 to 1940. While a UF student, he was elected president of the sophomore class and was a member of the Florida Blue Key leadership society. He was also a star athlete, captained the varsity boxing team, set the university record for fastest knock-out—12 seconds including the count—won the Southeastern Conference (SEC) middle-weight championship, and was later inducted into the Florida Gator F-Club Hall of Fame as a distinguished letter winner. O’Connell completed both his bachelor of science degree from the College of Business Administration and his bachelor of laws degree from the College of Law in 1940. After briefly practicing law in Fort Lauderdale, O’Connell accepted an appointment as the civilian director of physical training for the U.S. Third Air Force in Tampa, and thereafter entered active duty service with the U.S. Army Air Corps when the United States entered World War II after the Japanese attack on Pearl Harbor. In appreciation of his loyal work on behalf of the Democratic Party, Governor LeRoy Collins appointed O’Connell to the Florida Supreme Court in 1955. His fellow justices elected him chief justice of the court in 1967, in which position he would serve only briefly as the Florida Board of Regents selected him to be the president of the University of Florida in 1967. O’Connell was the sixth president of the University of Florida, and the first alumnus to be appointed as its president. His greatest long-term impact may have been the reorganization of the University of Florida Alumni Association and the creation of an Office of Development staffed by professional fundraisers. This reorganization led to the rapid growth of the university’s endowment over the years following his presidency. O’Connell began a reversal of policy and attitudes among many state legislators and academics who had previously opposed large-scale private fund-raising and endowment of the Florida’s public universities. After retiring as University President in 1973, he returned to his home in Tallahassee. When its construction was completed in 1980, the Stephen C. O’Connell was named for him in recognition of his service to his alma mater. The multi-purpose athletic arena and entertainment venue is located on UF’s Gainesville campus and is known to students as the “O’Dome.” O’Connell died on his cattle ranch near Tallahassee, on April 13, 2001, at the age of 85.