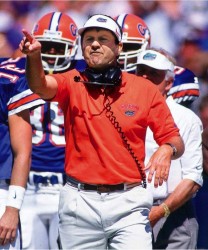 Steve Spurrier played quarterback for Coach Ray Graves at the University of Florida, where he won the Heisman Trophy in 1966. In addition to being a stellar passer, he gained notoriety by waving off the starting place-kicker and booting a forty-yard field goal to defeat Auburn 30–27 in a key game during his senior season. Spurrier finished his three-year, thirty-one-game career as Florida’s starting quarterback having completed 392 of 692 attempts, with 4,848 passing yards, 37 touchdowns and 442 yards rushing. In addition to winning the Heisman, he was selected as a first-team All-American in 1965 and 1966.

The San Francisco 49ers selected Spurrier in the first round of the 1967 NFL Draft. Spurrier played for the 49ers for 9 seasons, before being traded to the Tampa Bay Bucanneers expansion team for his final NFL season in 1976. During his 10 year NFL career, Spurrier played in 106 games, completing 597 passes in 1,151 attempts, for a total of 6,878 yards and 40 touchdowns.

In 1989, Spurrier became the head football coach of the University of Florida Gators. He inherited a team under NCAA investigation for the 2nd time in 5 years, and a football program that had never won an officially recognized Southeastern Conference (SEC) football championship in 57 seasons. Steve successfully steered the program away from the previous scandals and captured the Gators’ 1st officially recognized SEC title in 1991. Under Spurrier, the Gators won the SEC title four of the next five years, and represented the SEC East in the 1st five SEC Championship Games. The 1996 team captured the Gators’ first-ever National Championship with a 52–20 win over Florida State in the Sugar Bowl, avenging the Gators’ sole regular-season loss in which Florida State upset Florida 24–21 in Tallahassee.

The 1996 National Championship notwithstanding, Spurrier’s finest moment as a coach may have been the Gators’ 1997 game against the previously undefeated and national title game-bound Florida State Seminoles. Spurrier used a 2 quarterback offense, rotating Doug Johnson and Noah Brindise in and out of the game, confusing the Florida State defense and its veteran coordinator, Mickey Andrews, and giving Spurrier more time to counsel his quarterbacks on the sidelines without having to use time-outs. Florida upset the heavily-favored Seminoles 32–29.

Significantly, Spurrier is credited with changing the way the SEC played football. Spurrier employed a pass-oriented offense (known in the sports media as the “Fun ‘n’ Gun”) in contrast to the ball-control, rush-oriented offenses that were traditionally played in the SEC. His innovative offensive schemes forced many coaches in the SEC to change their offensive and defensive play-calling.