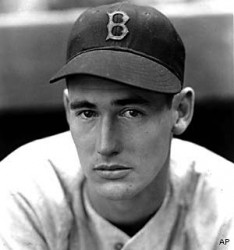 Ted Williams played left field for the Boston Red Sox, but what he was most famous for was hitting. He is known as one of the greatest hitters ever. He played for the Red Sox 21 years, twice interrupted by military service as a Marine Corps pilot. His nicknames were: The Kid, the Splendid Splinter, Teddy Ballgame, and The Thumper. Ted was a two-time American League MVP and led the league in batting six times. He was a two-time winner of the Triple Crown. Williams had a career batting average of .344 with 521 home runs. He was known as one of the most potent left-handed hitters in the MLB. In 1941, William’s last game of the season, he was at .39955 which rounded to .400. The Red Sox had a double header that day and Williams ended the season with a .406 batting average, making him the first man to hit .400 since Billy Terry in 1930. In 1949, Williams reached base in 84 consecutive games. The Red Sox retired his number nine jersey. In 1966, Williams was inducted into the Baseball Hall of Fame. Williams ended his career with a home run at his last at-bat. After suffering a series of strokes and congestive heart failure, he died of cardiac arrest at the age of 83 in Inverness, FL on July 5, 2002.