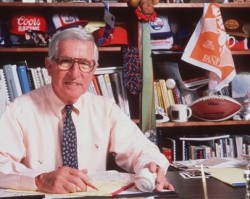 Tom McEwen was the sports editor of The Tampa Times from 1958-62 before being named sports editor of the Tampa Tribune in 1962. His signature articles in the Tribune sports section were his award-winning column, ”The Morning After,” and his ”Breakfast Bonus”. He is a 19-time Florida Sports Writer of the Year. He sat on NFL Pro Hall of Fame Selection committee for 30 years, as well as college hall of fame selection committee. He has had a hand in bringing the Bucs, Lightning, soccer, and New York Yankees spring training to Tampa. He has also been instrumental in the building of Tampa Stadium, then Raymond James, the Ice Palace, and Legends field where the Yankees train. He is regarded as a legend in the Tampa Bay area as a sports writer.