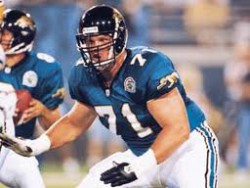 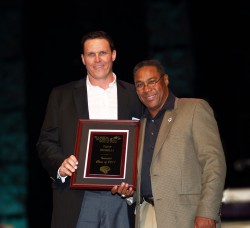 Tony Boselli, Jr, is ranked as one of the greatest Offensive Lineman to play in the NFL. Boselli, Jacksonville Jaguars #71, has the distinction of being the first draft pick in the Jaguars franchise history and was referred to as the cornerstone of the team. Boselli was a 4 time Associated Press All Pro selection and a five time NFL Pro Bowl selection. Boselli was named NFL Lineman of the Year twice; was named All NFL Team in 1997, 1998, and 1999; he was named to the All-Decade Team of the nineties and NFL All Pro Dad. Tony Boselli was selected as the first pick of the 2002 Houston Texans Expansion Draft. However, due to frequent injuries over the previous two years, he retired from the Texans in 2004. In 2006, Boselli re-signed and then immediately retired as a Jacksonville Jaguars player. He was honored in October 2006 as the first inductee into the Pride of the Jaguars, where his name, number and years of playing are permanently displayed on the interior ring of the stadium. In 2007, Boselli was a first time nominee into the Pro Football Hall of Fame and ranked number 2 as a Fox television NFL broadcast team, with his partner Ron Pitts, by Dr. Z at SI.Com.

Tony, who grew up in Boulder, Colorado, graduated from the University of Southern California School of Business, and played football for the Trojans. While at USC, Boselli was a first team All American and All PAC-10 choice in 1991, 1992 and 1994, the first three time Playboy Pre-Season All American in 1992, 1993, and 1994, won the Morris Trophy, an award to the best offensive or defensive lineman in the PAC-10 and was honored as USC Athlete of the Year in 1994/1995. 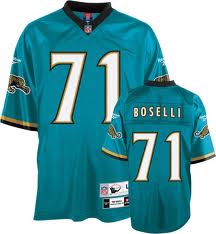 Boselli is an accomplished businessman owning several corporations, sits on non-profit boards, as well as building his and Angi’s dream of Helping Children become Champions through The Boselli Foundation and the Tony Boselli Youth Life Learning Center, an after-school program developed by football great Daryl Green in Washington DC. Tony has recently been tasked by Mayor John Peyton to lead the Neighborhood Safety and Stability committee for the Jacksonville Journey initiative.

On the personal side, Boselli and his wife Angi and their five children have made Ponte Vedra Beach, Florida their home. Tony is active in his church, and off the field, Tony’s humanitarian focus is on children. Through the programs of The Boselli Foundation, Tony and his wife Angi are striving to fulfill their mission: helping children become champions at home, at school and in the community! Tony serves as President of the Board of Directors of The Boselli Foundation and provides much of the impetus which drives foundation programs.