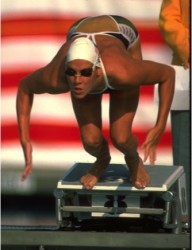 In 1978, at the age of 15, Tracy Caulkins won the James E. Sullivan Award given by the Amatuer Athletic Union in recognition of the most outstanding amateur athlete of the year. To date, she is the youngest-ever recipient of the Sullivan Award. Also that year, in perhaps her most impressive performance, she won five gold medals and a silver medal at the 1978 World Championships in West Berlin, West Germany.Following her success at the 1978 World Championship, and like many other American athletes, she was expected to put in a great performance at the 1980 Summer Olympics in Moscow, Russia. However, the United States Olympic team boycotted the Games at the behest of U.S. President Jimmy Carter, following the Soviet Union’s 1979 invasion of Afghanistan. Caulkins’ dream of Olympic gold was deferred by war and politics. Over the next four years, Tracy maintained her training regimen while attending the University of Florida, where she swam for the Florida Gators team under Coach Randy Reese. In NCAA competition, Caulkins set American records in virtually every event in which she swam, and surpassing Johnny Weissmuller’s record number of national swimming championships. At the 1984 Summer Olympics in Los Angeles, Caulkins won three gold medals in the 200-meter individual medley, the 400-meter individual medley, and by swimming the breaststroke leg of the women’s 400-meter medley relay.

Caulkins was noted for her versatility and ability in all 4 major competitive swimming strokes: the butterfly, breastroke, backstroke and freestyle. She won 48 national championships and set American records in all four strokes over a range of distances as well as in the individual medley (IM) events, which combine all four strokes over the course of a single race. Her versatility brought her many titles and awards, and as a result she is considered one of the greatest swimmers of all time. By the time she retired from competitive swimming in 1984, she had set five world records and 63 American records (more than any other American swimmer, male or female).