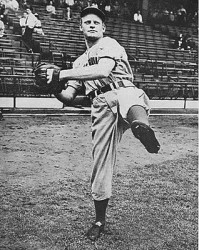 Rip Sewell is known for inventing the blooper pitch. He got injured in a hunting accident and injured the big toe he pitched off of resulting in changing his pitching rotation and created the blooper bitch. Maurice Van Robays, a Pittsburg outfielder, named this pitch Eephus. With this pitch, Rip won 17 games in 1942, which was followed with 21-win seasons in 1943 and 1944.