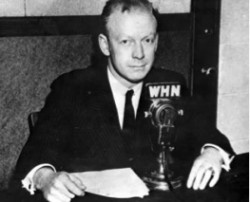 Walter Lanier Barber was born February 17th, 1908 in Columbus, MS. At the age of 26, he became the radio broadcaster for Major League Baseball’s Cincinnati Reds. During his time with the Reds, Walter had the privilege of announcing the first-ever televised baseball game in history, a Reds vs. Brooklyn Dodgers double header.

In 1939, Barber made the switch to the Brooklyn Dodgers, where he became known as “The Voice of the Dodgers.” before moving on in 1954 to call games for the New York Yankees. At one point, he made the faux pas of informing listeners the true crowd size in the stadium: 413.

After retiring from his baseball broadcasting career, Lanier wrote several books, including his autobiography. He was awarded the Ford C. Frick Award in 1978. Lanier died in 1992 in Tallahassee before being inducted into the Radio Hall of Fame in 1995.