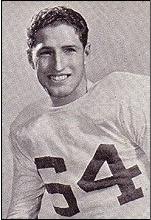 Walter “Tiger” Mayberry was a quarterback and a halfback for the University of Florida football team. He became the Gators’ first ever All-SEC player in 1937. Walter was also widely recognized for his punting ability.

Mayberry was the 8th pick in the first round of the 1937 NFL draft. During World War II, he became a Marine fighter pilot. His plane was shot down and he was captured. Mayberry died in a Japanese POW camp in 1943 during an Allied air raid on Rabaul. He was one of seven former Gator football players who lost their lives in the war.