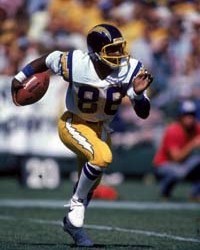 Despite playing in the run-oriented Wishbone offense, Wes Chandler was one of the best pass receivers in Florida Gator football history, earning first team All-America in both 1976 and 1977. Chandler caught 92 passes in his career, good for 1,963 yards and a school record 22 touchdowns. He scored a then school-record 28 touchdowns during his career and was the highest scoring non-kicker in Florida history with 172 points. To complete his college career, Wes played in the Senior Bowl and East-West game in 1978. Chandler was selected as an All-Pro wide receiver with San Diego Chargers before retiring in 1988. He was named the NFL Wide Receiver of the Year in 1982 by the NFL Alumni Association, as well as the NFL Player of the Year. In 1999, Wes Chandler was named to the Gainesville Sun’s University of Florida Football Team of the Century.