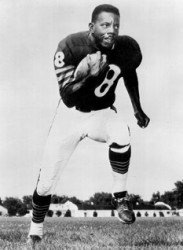 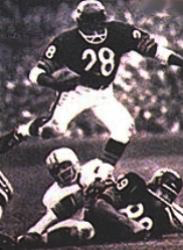 Willie Galimore (March 30, 1935 – July 27, 1964) was a football running back who attended Florida A&M University, playing under the legendary coach Jake Gaither. Galimore is a member of the College Football Hall of Fame. He played for the Chicago Bears from 1957 though 1963, and was selected for 1958 Pro Bowl.

Galimore possessed incredible speed and lateral movement; many of the opposing players of the time stated that they believed Galimore could run side-to-side down the field just as fast as most men could in a straight line. In a documentary short by NFL Films on Galimore, it was said that he was probably the last great find before NFL scouting became sophisticated. His peers (including Chuck Bednarik and Doug Atkins) referred to Galimore as one of the best runners they ever faced. 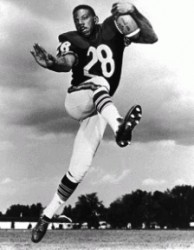 Galimore was killed in an automobile accident on July 27, 1964 in Rensselaer, IN, at the age of 29. His number 28 has been retired by the Bears.

His son, Ron Galimore, went on to become the first Black U.S. Olympic gymnast. A freedom trail marker has been placed outside of Galimore’s St. Augustine home to commemorate his work as a civil rights activist.