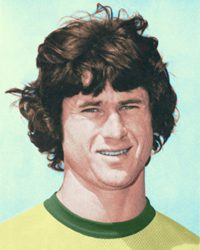 Winston DuBose, a Winter Park, Fla native, begun soccer at age 16, at Trinity Preparatory School of Florida. He enrolled at the University of Central Florida (formerly Florida Technological University) in Sept 1973, age 18 and became the first three-time NCAA All-American in all sports at UCF (1974, 1975, 1976) as Goalkeeper for men’s soccer. In March 1977, at age 21, DuBose signed a professional contract with the Tampa Bay Rowdies, North American Soccer League. In March of 1982, he was traded to Tulsa Roughnecks of the NASL where he started in 2 of 3 “NASL Soccer Bowl” games with the Tampa Bay Rowdies 1978 (started), 1979 (DNP), and Tulsa Roughnecks in 1983 (started). DuBose won Soccer Bowl 1983 with the Tulsa Roughnecks and was team MVP in 1983. He was also the first American to get an English “work permit” to play for Oldham Athletic in the English second division (1988-1989). DuBose played for United States National Men’s team from 1979-1985 where he registered 14 caps. He competed in World Cup qualifying games. DuBose played for Tampa Bay Rowdies of the American Professional Soccer league from March 1988-March 1992 and was Team MVP in 1988. He was selected to APSL (American Professional Soccer League) All-Star team in 1988 and 1989. DuBose retired in March 1992 having played in 327 professional games in all competitions