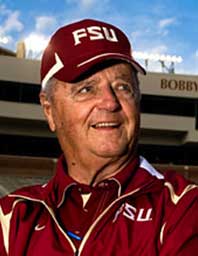 The Florida Sports Hall of Fame would like to acknowledge the passing of one of its most popular and beloved members with the passing of college football coaching great, Bobby Bowden, who served as the head coach of the Florida State University Seminoles’ football team from the 1976 to 2009 seasons. During his time at Florida State, Bowden led FSU to an Associated Press and Coaches Poll National Title in 1993 and a BCS National Championship Title in 1999, as well as twelve Atlantic Coast Conference Championships since FSU joined the conference in 1991.

Coach Bowden was inducted into the Florida Sports Hall of Fame in 1983. In his 44 seasons as a head coach, Bowden had 40 winning seasons, and 36 Division 1-A winning seasons. During the period 1987–2000, Bowden coached Florida State to 14 straight seasons with 10 or more victories, and his team had a final ranking of fifth or higher in both major polls. Bowden finished his career second in all-time wins by a Division I – Football Bowl Subdivision coach with 377 wins.

“On behalf of the board of the Florida Sports Hall of Fame, we wish to express our sincerest condolences to the Bowden family and Seminole Nation on the loss of Coach Bowden. Not only is he one of the greatest legends in college football, but the lasting impact he has left on the athletes he coached and everyone who knew and associated with him is immeasurable” said Tim Ramsberger, President and Chairman of the Board.

The Florida Sports Hall of Fame recognizes and honors Florida’s greatest sports figures and events and leverages the collective celebrity to promote fitness awareness, education and sports activities among our state’s youth and adults. Equally important is the promotion of the qualities of discipline and honor among sports participants. Memorabilia from Coach Bowden’s legendary career is on display at the Florida Sports Hall of Fame located in the MidFlorida Events Center in Port St. Lucie, FL. For more information, visit www.FlaSportsHOF.org.