Tampa, FL – As the celebrations continue for the NHL’s Tampa Bay Lightning winning back-to-back Stanley Cup Championships and, thereby, keeping the Cup in Tampa Bay, we thought it appropriate to acknowledge our members who have played a part in building and maintaining the franchise. 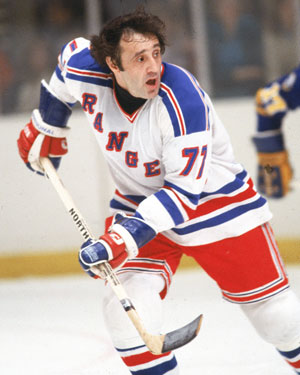 His playing days are remarkable as well. Inducted into the Hockey Hall of Fame in 1984, Esposito was a 10-time NHL All-Star, six of those years as a first-teamer, and had his No. 7 jersey retired by the Boston Bruins in 1987. He retired as the second leading all-time NHL goal and point scorer and was third all-time in assists. To this day, he remains among the elite in NHL history in goals, points, and assists. During the 1970’s, Esposito became the first player in NHL history to score 1,000 points in a decade.

It was Esposito’s determined effort to bring investors, business leaders and NHL executives together to make Tampa Bay a franchise site. Against all odds, Esposito’s dream became a reality, and the Lightning was born in 1991. The franchise would go on to win the 2004, 2020 and now the 2021 Stanley Cup, and have become one of the most successful and beloved organizations in professional sports.

Esposito was inducted into the Florida Sports Hall of Fame in 2016 in a ceremony held in Tampa. 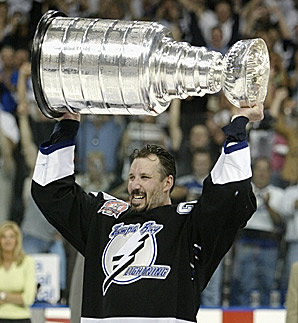 Dave Andreychuk entered the NHL as an 18-year-old for Buffalo, so close to his home in Hamilton that he could still pretty much live at home. He scored a goal in his first game, and in his first full season he scored 38 goals, establishing himself as a natural scorer.

During his first ten years with the Sabres, the team won only one of nine playoff series. Midway through the 1992-93 season he was involved in a major trade that sent him to the Toronto Maple Leafs. The move rejuvenated his career, as he finished the season with 54 goals, one of the few times a player has hit the 50-mark during a year he was traded.

Andreychuk scored 53 the next year to break Frank Mahovlich’s team record for a left-winger, but again in Toronto he didn’t win a Cup and GM Cliff Fletcher sent him to New Jersey for two draft choices. He signed with Boston as a free agent but was traded to Colorado in the same deal that involved Ray Bourque, but still the Avs made it no farther than the semi-finals in the spring of 2000.

After a return stint with Buffalo in 2000-01, Andreychuk signed with the Tampa Bay Lightning. He is one of only four players to score 30 or more power-play goals in a season and is the second-highest scoring right-winger in league history, surpassing the 600-goal mark in 2002-03 and the 1,300-point mark the following year while captaining the Tampa Bay Lightning to their first Stanley Cup title in franchise history and Andreychuk’s first of his illustrious 22-year career.

Following 42 games of the 2005-06 season the veteran forward was waived by the Tampa Bay Lightning on January 10, 2006, bringing an end to his long playing career.

The Florida Sports Hall of Fame recognizes and honors Florida’s greatest sports figures and events and leverages this collective celebrity to promote fitness awareness, education and sports activities among our state’s youth and adults. Equally important is the promotion of the qualities of discipline and honor among sports participants.

Located in the MidFlorida Events Center in Port St. Lucie, FL, the Florida Sports Hall of Fame includes exhibits from some of Florida’s most well-known sports stars, including legendary golfer Jack Nicklaus; Coach Bobby Bowden; National Hot Rod Association legend “Big Daddy” Don Garlits; golfer Andy Bean, tennis great Chris Evert, football legend Bob Griese and many more. Exhibits will be updated each year as new classes are inducted. Tiger Woods, Pat Riley and Alex Rodriquez are among the names to be inducted as part of the 2020/1 class. The date and time for that enshrinement event is still to be determined. For more information, visit www.FlaSportsHOF.org.