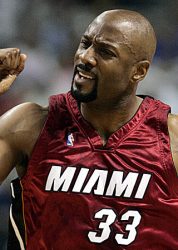 A center and power forward, Alonzo Mourning spent the majority of his National Basketball Association career with Miami, playing 11 seasons over two different stints for the HEAT, and was on the 2006 World Championship team. He averaged more than 17 points and 8.5 rebounds in his career, earning seven All-Star nods. Nine times Alonzo helped the Heat to the post-season. Mourning finished in the top 20 in the NBA in blocks, 11 times, and in rebounds, five times. Alonzo won NBA Defensive Player of the Year Awards twice and was the 2001-02 recipient of the J. Walter Kennedy Citizenship Award.