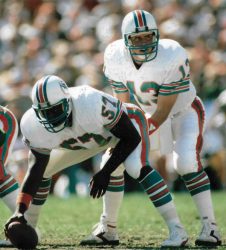 Dwight Stephenson played center for the Miami Dolphins from 1980 to 1987 where he established himself as one of the best in the league. He was drafted in the second round from the University of Alabama. From 1983 to 1987 he earned both All-Pro and All-AFC recognition. He also made five straight Pro Bowls (four as a starter). In his eight seasons, Stephenson played in all 16 games six times. He also won two AFC Championships and started in Super Bowl XVII and Super Bowl XIX. As an inductee of the Pro Football Hall of Fame in 1998, Stephenson is one of just nine Dolphin players to have donned the Gold Jacket.